Head strongly made, large but in
proportion to the dog’s size. Muscles
showing extraordinary development,
especially the maxillary. Skull broad, 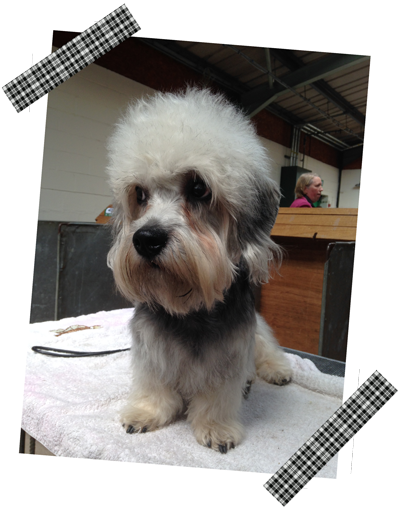 narrowing towards the eye, measuring
about the same from the inner corner
of the eye to back of skull, as from ear
to ear. Forehead well domed; head
covered with very soft, silky hair which
is not confined to a mere topknot.
Cheeks gradually tapering towards
deep and strongly made muzzle.
Muzzle in proportion to skull as three
is to five. Top of muzzle has triangular
are patch pointing backwards to ewes
from nose about an inch broad. Nose
black.

Rich dark hazel, set wide apart and low, large
bright. Full and round, but not protruding. 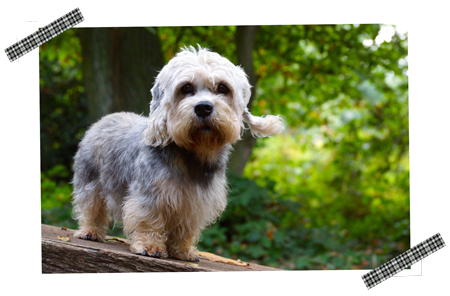 Pendulous, set well back, wide apart,
low on skull, hanging close to cheek
with very slight projection at base;
broad at junction of the head and
tapering almost to a point, fore-part
of ear coming almost straight down
from its junction with head to tip.
Cartilage and skin of ear very
thin. Length of ear from three to four
inches. Ear harmonise in colour with
body colour. In a pepper dog covered
with soft, straight, dark hair (in some
cases almost black)in a mustard dog,
hair mustard in colour, a shade darker
than body, but not black. Both should
have a thin father of light hair
starting about two inches from the tip,
and of nearly the same colour and
texture as the topknot,
giving the appearance of a distinct
point.This may not appear until after
the age of two years. 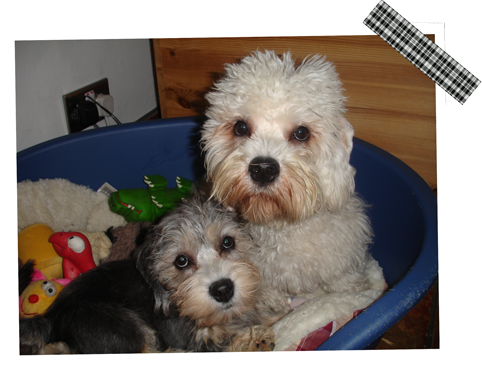 Jaws strong with a perfect regular and
complete scissor bit i.e. the upper
teeth closely overlapping the lower
teeth and set Square to the jaws. Any
deviation is highly undesirable. Teeth
very strong especially the canines
which are extraordinary in size or a
small dog. Canines fit well against
each other, to give greatest available
holding and punishing powers. Insider
of mouth black or dark coloured.

Shoulders well laid back but not heavy. Forelegs short with immense muscular development and bone set wide apart and chest coming well down between
them. Forelegs to follow line of chest with feet pointing forward or slightly
outward when standing. Bandy legs highly undesirable.

Long, strong and flexible; ribs well sprung and round, chest well developed
and well let down between forelegs; back rather low at shoulders having a
slight downward curve and a corresponding arch over loins, slightly gradual
drop from top of loin to root of tail. Backbone well muscled.

Round and well padded. Hind feet smaller than fore feet. Nails dark, by varying
in shades according to colour of coat. Flat or open feet highly undesirable.

Rather short, from 8-10 inches, rather thick at root, getting thicker for about
10 cm (4ins) and tapering off to a point. Not twisted or curled in any way but
with a curve like a scimitar, the tip when excited carried gaily a little above
the level of the body.

Very important feature of the breed. Hair should be about 5cms (2ins) long.
Double coat with soft linty undercoat and a harder topcoat, not wiry but
giving a crisp feel to the hand. The coat should not ‘shed’ down the back,
but should lie in the pencils caused by the harder hair coming through
the softer undercoat. The fore legs have feather about 5cms (2ins) long.
Upper side of tail covered with wiry hair, underside not so wiry with neat
feathering of softer hair.

merging into colour from rich tan to pale fawn. Profuse silvery white topknot.
Mustard varies reddish brown to pale fawn. Profuse creamy white topknot,
legs and feet of a darker shade than head. In both colours feather on fore
legs rather lighter than hair on fore part of leg. Some white hair on chest
and white nails permissible. White feet undesirable. Hair on underside of
tail, lighter than on upper side which should be a darker colour than body.

The height at withers should be from 8’’ to 11’’ length from withers to root
o tail shout not be more than twice the height, but preferably 1’’ to 2’’ less.
Weight 8-11 kilograms (18-24lbs) for dogs in good working condition. The
lower weights preferred.

Any departure from the foregoing points should be considered a fault and
the seriousness with which the fault should be regarded should be in exact
proportion to its degree.